Best Places To Meet Ladyboys In The Philippines 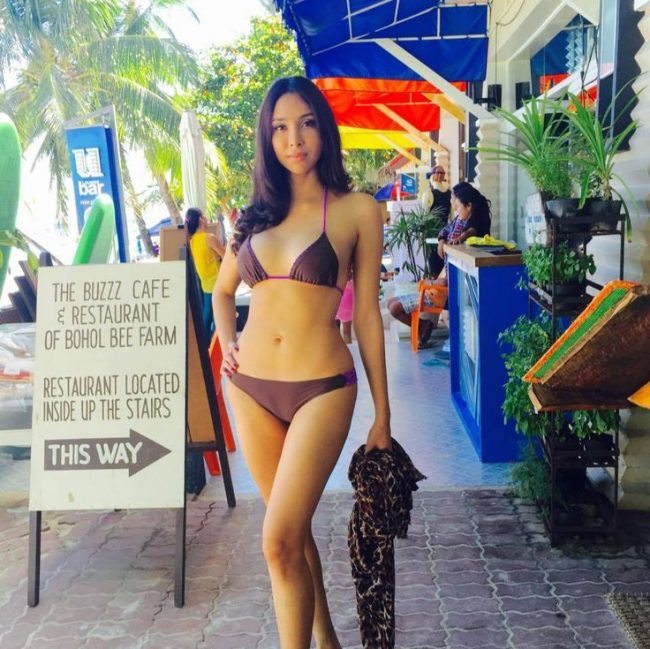 The best places to meet ladyboys in the Philippines are not always that easy to pin down. Well, the easiest way to meet them is t4m online dating and we will tell you more about that soon, but as far as spots to pick on a map this is kind of an interesting country in regards to the transgender scene.

Actually it is pretty similar to what you find all over Southeast Asia, although there are definitely more Philippines ladyboys around than most other countries. The thing is that most tourists are only likely to come across trans prostitutes.

Like in many poorer countries wherever tourists go there will be prostitutes or a red light district around. Most of the hookers are going to be female, but there will be some ladyboys in the red light areas as well.

Some guys may hook up with shemale hookers for a quick fix, but for guys who want to date ts girls or find a life partner they probably won’t be who you should go with. Actually, the whole prostitution angle in regards to Filipina ladyboys near you is so important that we should probably devote the first section to that.

Once we get that out of the way we will go city to city mentioning the best ladyboy hot spots in the Philippines.

This site does not promote prostitution and we never link out to any trans escort services or brothels. We might mention them, but we will only put our readers in contact with LGBT pick up bars or dating sites to meet good and genuine ladyboys for dating, not sex workers.

But in a place like the Philippines the lines between genuine and sex worker are pretty blurred. This is a very poor country, jobs that pay a decent living wage are hard to come by, and they are even harder for transgenders to get.

We aren’t saying all of the ts girls are forced into prostitution, but the other options that Filipina ladyboys are presented with aren’t too appealing either. So while we generally would say that you should never even consider dating or having a serious relationship with someone who was once a sex worker it is not a 100% thing here.

It is still highly unlikely to go well, but there is a bigger chance here than most places. Filipina hookers are known to give a great girlfriend experience meaning they treat it like a normal date not just a business transaction. Sometimes that is just an illusion, other times they really are looking for a boyfriend.

As a first time visitor it will be very hard to tell the difference. Honestly, we aren’t really sure how you should handle it and it is definitely still advisable for you to avoid sex workers and certainly not think of them as your life partner. On the other hand, things are more blurred here than just about anywhere else on the planet.

Why do we feel like this is so important to discuss? Because 98% of all Philippines ladyboys near you that will be out and about on your trip are likely to be in red light districts or in places that tourists frequent hoping to get paid. Even the dating sites will have many, and if you are very anti prostitute then you should definitely ask all of them, no matter where you meet, if they want you to pay them before you hang out together.

There are thousands of transsexuals who are not hookers, but tourists just don’t run into them very often. We are going to list some of the best places to meet ladyboys in the Philippines shortly, but they are pretty much all red light or nightlife districts.

Most Trans In Manila

This shouldn’t be a surprise, you will find far more transgenders in Manila than anywhere else in the country. Particularly when it comes to meeting them out and about in the nightlife, this city has probably ten times the population of any other and the best nightlife in the country as well.

But there aren’t even really any trans friendly bars here other than where prostitutes go. The closest thing would be Exklusiv Nightclub in Malate, but there are no guarantees that any Manila ladyboys will be partying here when you visit.

For the most part tourists are going to be coming across ts prostitutes at the red light district where there is a ladyboy bar and plenty of transsexual hookers on the street. Also a popular prostitute bar at one of the major malls in the city. Both of those ladyboy prostitute hot spots are in Makati.

The second largest city in the Philippines is great for ladyboy online dating. The world’s largest transgender dating site is MyLadyboyDate, and there are as many Cebu City ladyboys on it as you will find in Manila. Considering this city only has 10% of the population of the nation’s capital that is pretty crazy if you think about it.

Plus PinaLove also is great, you can use the main Filipino Dating Site and search for ts only by switching to ladyboys on the top left. Why are we mentioning the ts online dating options here first?

For two reasons, the first is that this city might have the best ts online dating in the world. The second is that outside of online dating your options kinda suck.

Two years ago we would have told you to go to Mango Square, for the longest time this was the main nightlife and ladyboy hot spot in the city. Now it has been turned down and there aren’t really any great trans pick up spots.

You can go to Ayala Mall and walk around the terraces, or maybe go try and party at Oqtagon which is one of the best most popular clubs in the city. For online dating with ladyboys Cebu City is great, for LGBT nightlife it is not at all. 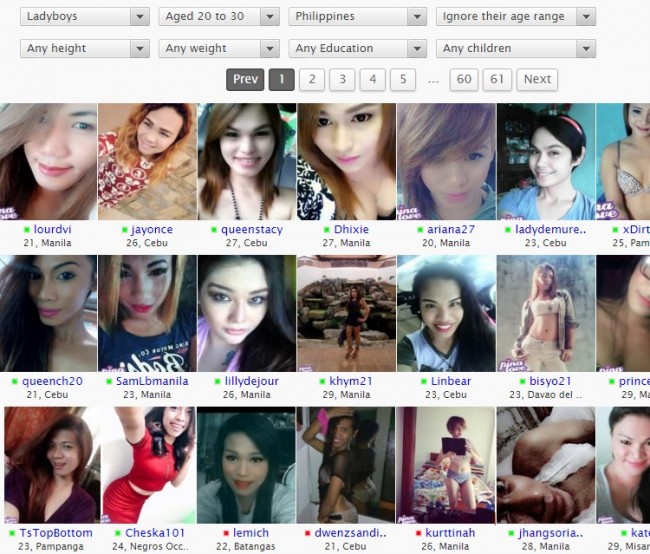 If you want to hook up with ladyboy prostitutes in the Philippines Angeles City might be the easiest place, or tied with Manila. There is a huge red light district here and many trans sex workers have followed.

The entrance to the red light district will be the main ts pick up spot. Or you can go to the ladyboy bar, but always remember you will need to pay in this city. If you want a life partner or serious ts dating choose another town.

Many people visit the Philippines for great beaches like you find in Boracay, Bohol, Palawan, and Puerto Galera. These are often very touristy places to visit, and as this post has mentioned a few times prostitutes follow the tourist dollars and ladyboy hookers are included in that.

For ladyboys in Boracay you would want to hang out in the main nightlife area around Station 2. Cocomanga’s is the main bar in the nightlife area and Boracay trans might be inside or on the streets and beach nearby. Some might be shemale prostitutes but hopefully they won’t all be.

Finding ladyboys in Palawan will be a lot harder. There is limited nightlife here and limited prostitution. We do not know of any specific transgender bars in Palawan, but if you keep your eyes open as you walk around the main nightlife areas do not be surprised if you spot some.

The same kind of holds true when looking for ladyboys in Bohol. Aimes and Spiked Coconut are the main bars in town and some prostitutes might be around, if you are going to see any Bohol ladyboys out partying they will either be inside them or on the streets nearby.

For ladyboys in Puerto Galera hang out in Sabang around the girly bars and hope that one passes by. There are no guarantees in these Philippines beach towns, you might get lucky or you might now.

Smaller Towns In The Philippines

Just like there are no guarantees to meet ladyboys in Philippines beach towns the same holds true in some smaller cities like Davao City, Bacolod City, Baguio City, IloIlo, Tacloban, Dumaguete and Cagayan de Oro. All you can really do here is go out in the main nightlife areas and hope for the best.

You could try to meet ladyboy prostitutes in Bacolod City at the Goldenfields Complex or the main nightclub in town is MO2 where they may not be hookers. For Davao there will be some around the girly bars. In the other cities just stay where most tourists stay, party where most tourists party, and always be on the look out.

Filipina ladyboys will often work in salons, if you pass by a salon try and look inside and see if any ts girls are working. Ya, when we get to mentioning salons we are stretching for info, but luckily our next section is the most fruitful of all.

If you are looking for a Filipina ladyboy for dating, to make your life partner, or for a ts girl to hook up with that isn’t a hooker online dating is the way to go. Within minutes you can contact more transgenders that aren’t hookers than you could in months of searching the nightlife districts.

Remember though, some will be hookers, particularly in places like Angeles City or Manila. If in doubt just politely ask, say the last two ts girls you talked to asked you to pay them and you were wondering if they also did. As long as you do not do it in an accusatory way they shouldn’t get upset.

MyLadyboyDate is always our number one option for ts online dating. It is the biggest trans dating site in the world and the Philippines has more ts members than anywhere else, yes, even more than Thailand.

MyLadyboyDate will be your best option for meeting a good and genuine trans who wants a real relationship or a hook up that doesn’t have to do with money. Our number two suggestion would be PinaLove, remember you can change to search for ladyboys only at the top left in the search settings of this t4m site.

If you have never tried dating a ladyboy before just treat them the way they want to be treated, meaning act like you are on a date with a girl. Be nice, be polite, and have some fun. If you are a bit shy to be seen in public with a trans maybe have the first date at a quiet coffee shop, or see if they want to come to your place where there is more privacy. Just no if they say yes to that second option it raises the likelihood they are hookers.

Now we have covered the best places to meet ladyboys in the Philippines, the ts dating sites are great and you will never be lacking for dates in this country.